What is that bad smell??

Maybe your air conditioning hasn’t worked for a while or maybe you’re worried about that initial unpleasant smell?

The odour emitted from the ventilation system will indicate there is something wrong with the air conditioning. In most cases this is due to the formation of bacteria and fungi in the system. This gets systematically blown back in to the vehicle cabin as the system is switched on. The air con system can be the ideal breeding ground for bacteria and other micro-organisms which get in through the ventilation system. This is particularly concerning for sufferers of asthma or allergies.

In-car cleanliness is important to the driver’s welfare and comfort as well as any passengers.

Kevin Gourven, Thermal Global Product Line Manager at Delphi says “The bacteria will never go away if you don’t service your car. They exist in the pipes and the receiver dryer, which is there to retain all of the pollution within the system”. He adds “It is not a system that will stop their car from driving but it is crucial for their safety and comfort”. 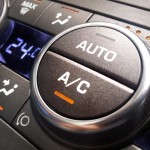 Utilising your Air conditioning system can be better on fuel consumption

Based on a study conducted by the Society of Automotive Engineers (SAE), driving with the windows up and the air conditioning on is a more fuel-efficient way to drive.

What you can do to help: